Life On The Syrian Border

At the border I meet a photojournalist. He’s rough looking, missing a few teeth and wearing bulletproofed gear. He looks at my thin leather jacket, then my blue eyes.
“You don’t have any combat gear? Anything warmer than that?” He asks me with a British accent.
I don’t.
“Go with your gut feeling mate, if you feel scared, turn away. And good luck!”
Right now I’m about to do exactly that. Just turn away and go back to where I came from. Some place safe. 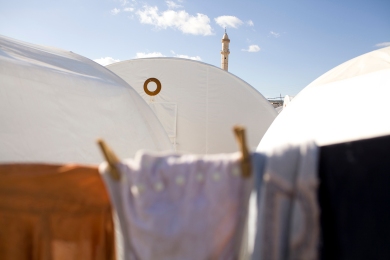 Young boys watches as a demonstration is being organized.

Soldiers in the Free Syrian Army manning a control post on the Azaz border to Turkey are checking cars coming from Syria trying to reach Turkey.

A NGO worker stands in one of two tents acting as storage for the supplies that comes in through Turkey.

Two women are crossing the border into Syria from Turkey with a van full of supplies.

Barbed wire and the threat of mines divide the two countries.

Laser printed A4 copies showing ‘martyrs’, soldiers from the FSA who has died fighting. 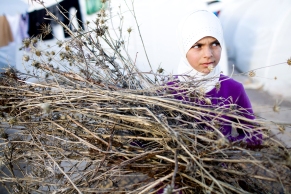 A young girl collects twigs for a fire so her family can stay warm.

Soldiers in the Free Syrian Army manning a control post on the Azaz border to Turkey. 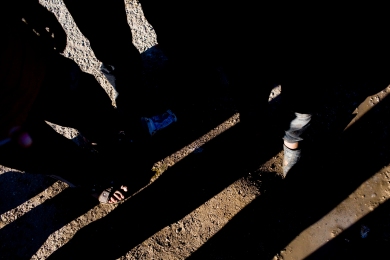 Not many have proper shoes, especially the children often goes barefooted

A new kitchen is under construction, this will enable the IHH to feed the refugees twice a day.

Water is collected at the nearby mosque

Khalid is six years old. He was hit by one of the many bombs falling on Aleppo these days. He lost his left arm and half his foot and is itching all over. The doctor thinks it might be due to an infection in his blood.

A Syrian mother and her child oversees the distribution of emergency relief in Kilis.

There’s time for a quick prayer between the distribution of emergency relief in Kilis.

The youngest of three children gets a new pair of shoes from Turkish NGO IHH in Kilis.

An old Syrian lady watches as the refugees organize a demonstration that marches to the Turkish border and demands to be let in to Turkey. The people in this camp doesn’t have any passports so Turkey will not let them in to the country.